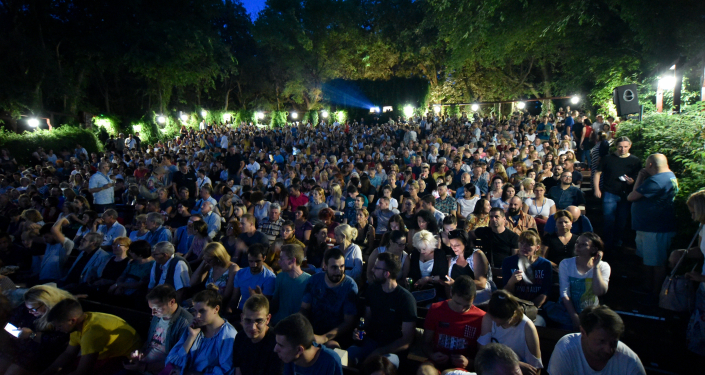 Official Selection is dedicated to those European films that provoke issues about destiny of European man, simultaneously pointing at the beauty and importance of diversity within European region.

These European films easily get to the audience as the identification with their protagonists is so real and possible both in their misery and their happiness. Emotions from the screen get emotional response from the audience.

Selection of 14 films is screened on Summer Stage. The films are in competition for Golden Tower for the best film of the Festival and two Palić Towers, for the Best Director and Special Jury Award. The films are going to be judged by five-member international jury as well as by FIPRESCI jury.

Competition programme Parallels and Encounters is dedicated to feature films and documentaries from former Eastern European geopolitical region and deals with problems of transition of societies and political systems, ethnic relations, identity and need for peace and co-existence, tolerance in the widest sense.

Films are screened in Abazija cinema and quality of the films is going to be evaluated by three-member jury composed of eminent European film critics.

Young Spirit of Europe programme is dedicated to brave and inventive authors of unique poetics and attitude towards film. The programme shows features, documentaries, shorts, experimental, animated and all other possible forms of film seeking for new ways of expression and future of this art.

The program is going to take place on the summer stage at the Abazija cinema in Palić.

Culture is something you can always count on while seeking the way of understanding and acceptance. Traditional program New Hungarian Film has already been of a great help as a part of culture, trying, trough the art of film, to find those who are open to learn about Hungary. The program is inspired by the fact that there is a great population of ethnic Hungarians in the Province of Vojvodina, that hasn’t got opportunity to be in touch with the trends of contemporary Hungarian film production in cinemas or TV.

In the last few decades European film experienced great changes. Small and big national cinemas cannot be differed anymore. At the European film scene there are numerous changes and sudden happenings that put certain cinemas in the center of interest. This is why, ten years ago, we introduced Country in Focus program which presents some of the most important and most interesting film productions in Europe every year. So far Festival presented cinemas of Sweden, Belgium, Norway, Finland, Austria, Israel, Russia, Czeck Republic, Poland, Turkey, Georgia, Slovakia, Greece, Bulgaria, Slovenia,...

We live in the world where we can clearly see dreadful impact of human deeds on natural environment and planet Earth in general and on the other hand we experience growing conscious for necessity of actions towards peace between human kind and nature. Referring to this, in 2008, we started program that deals with ecological documentaries. In this program there are 6 films of the newest production. Program is being followed by a vivid debate as well as scientific conference during the Festival, where experts and activists in the field of environmental protection have an opportunity to contemplate various topics and issues. The programmer is Igor M. Toholj.

New European Documentaries program, established in 2019, gathers five works from all parts of Europe selected by Igor Toholj. This selection, from a very fruitful but also heterogeneous European production, every year singles out current feature-length documentaries that are imposed by theme, approach or means of expression ranging from personal, hermetic, to those engaged and activist.

EFA Shorts is the European Film Academy's short film tour, which brings the latest European Short Film candidates, nominees and winner to audience across Europe - and beyond

European Film Festival Palic from 2008, as part of the Young Spirit of Europe program, assign european filmmaker with the Underground Spirit Award for outstanding work in the field of independent film and unique authorial poetics built outside the mainstream of the film industry. On this occasion, every year, we screen films dedicated to the laureates.

Eurocinema, as an annual European Film Festival project, dedicated to contemporary European cinema, is going to present selection of European children's animated and feature films that have entered cinema distribution in Serbia between the two festivals.

Classics on the square

On one of the most beautiful squares in the country European Film Festival Palić, within the pre-festival program, screens five significant European film classics.