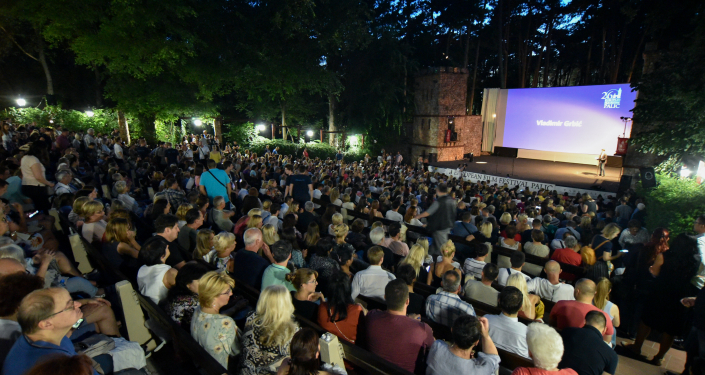 EUROPEAN FILM FESTIVAL PALIĆ, is currently one of the most important cultural events in Serbia, one of the most important film festivals in the region and one of the few in the world with 100% European cinema content. The founder of the festival is the City of Subotica, while the executive producer is the Open University Subotica, and as a manifestation of national importance, it is supported by the Ministry of Culture of the Republic of Serbia, the Secretary of Culture of Province of Vojvodina and the Municipality of Subotica. Palić European Film Festival aims to present the highest quality achievements of contemporary European cinema and nurture the tradition of authorial and artistic film in order to contribute to the cultural life not only of the city of Subotica and the Republic of Serbia, but also the entire region. The program specificity, as well as the authentic ambience in which it takes place, provides significant attention of filmmakers from all over the Europe and audiences from the entire region. In 2017, the European Festival Association EFA awarded our festival the EFFE award for one of the most exciting art festivals in Europe in 2017/2018.

We believe that through the exploration of the relationship between the real and the possible, art can contribute to reaffirmation of a more humane world. We believe that art is not for sale and that there are values which are impossible to relativize.

We believe that entertainment and consumption are not authentic symbols of the entire epoch, and that sense of social and moral order has not yet lost all its radicalism.

We believe that globalizing power of cultural imperialism should be confronted with broadness of human spirit and authentic art, regardless of the fact that the winner of that competition has long been known.

We believe that inspiration for conceiving a utopian project of cultural emancipation and deserting the glitter of the global entertainment industry can be provided by Europe which, though often torn between power and wisdom, still offers a number of opportunities.

We believe that European spirit is able of experiencing film art as a medium which corresponds to human need for play, fantasy and other substitutes for the real, but also understanding it as a truthful document of reality.

We believe that European film offers a measure of autonomy in relation to self-reproducing power of global market institutions which have turned even the cultural space into a brilliant investment field.

By means of selecting the highest quality modern European films who accept no compromises, the European Film Festival Palić wants to prove that this kind of belief is not in vain, and that any attempt at emancipation and renewal of critical consciousness truly makes sense.

The International Film Festival Palić was founded in 1992 by the Municipality of Subotica. From the earliest small and unpretentious film screenings in Palić, through the persistent attempts to create a serious regional film festival in the hard times of isolation, and the first attempts at getting closer to the cinematography of the former Yugoslav republics then being at war, it has grown into an important spot on the map of the European film festivals.

In the year 2003, with its 10th edition, it became a European Film Festival and a member of the European Coordination of Film Festivals. This was a very brave move at that moment. A lot of questions were raised, mainly about how the audience and the media would react. However, the founder of the festival and executive producer took a firm stand and didn’t want to give it up. Soon, the success was obvious. This idea has been confirmed and improved over the following years and today the European Film Festival Palić is one of most important film festivals in this region and one of the few in the world with 100% European content.

Subotica and Palić have thus confirmed they really are leaders of the European idea in the whole country. During the seven festival days Palić becomes a true European capital of culture, and year after year Palić audience proves to be the audience of the highest renown.